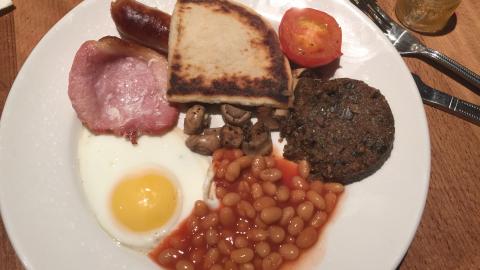 I get a lot out of these conferences, and not only the travel/party part, but also the networking and the social part (and yes, I also learn a hell of a lot ;-)

My former boss, at a rather small startup, went with me to one of those conferences, and his take from that was not the same as mine, saying that they are waste of time and money, and nothing "practical" came out of them.

I would like to disagree with him, because from each and every of those travels, something good came out of it.

In San Fransisco 2005, at Zend Con, I just got my feet wet, going to a conference.  I got to learn about PHPUnit (and met Sebastian Bergman, the man behind it), all kinds of core PHP functions, met some of the core people behind PHP and also found out that you should ALWAYS stay close to the conference venue.  In San Fransisco I also discovered one of my favourite restaurants, The Stinking Rose, where almost everything is served with garlic, including the garlic.  They even have garlic icecream!

In Chicago 2006 there were more PHP discoveries and more "get to know people", including my now ten year old friend, Mark Manley.  And we have discovered that our interests lie much further than just PHP programming (including sports and light design).  Of course I tried the famous Chicago deep dish pizza since I was there, and skipped McDonalds all thogether.

In Prague I learned about Scald, a media management module for D7 which I have used since then.  I also got to know the basics of Drupal Commerce, got to meet and know Johanna Bergmann from the Drupal Association, and I also met the legendary MorenDK for the first time (fokking shit*). I also tried a Czech hotdog and a pigs knee for dinner.

In Austin I learned to contribute for the first time for the D8 core, I submitted my first talk (not accepted though), learned about Chef and Docker and got into the wibe of the release phase of a major release (which I thought, in my naiveness, that we would launch during Austin 2014.  Little did I know).  I also found out that there was another Icelander there, and neither of us knew about the other one!  Also in Austin I got to meet tons persons that became my friends, I developed my Drupal username (drupalviking) (thanks MortenDK, you fucker*) and I found out that American Airlines are much more easy going about you missing your flight that the European companies.  And I can't forget to name-drop my good friends Ron Brawer and Jefferey JAM McGuire. In Austin they serve fresh Icelandic cod, so of course I tried that.  Yummi.

In Barcelona I had two BOF's, one on my own, one with members of YLE and DR (Finnish and Danish public radio stations), I participaded in the Pre-note (as drupalviking), got to meet Dries, had a photo-op with Angie (Webchick), got to know better more people, was on the second best team in the Pub-Quiz and I also learned a hell of a lot more about Drupal.

Finally in Edinburgh, I found out that my workflow might be improved, I found out a way to optimize my servers much better, handful of modules were introduced into my arsenal of tools and finally I made tons of new friends, because the camps are smaller than the cons. And I discovered Haggis.  Good with breakfast, not so good on your pizza.

For me, there is no question how much an employee can get out of a trip like this, both for his/hers own benefits and for the employer.  The only thing you need is an open mind.

* For those who don't know, MortenDK swears more than the average prostitute from Hull.